(For information on the January 4 memorial service, see after the following article)

Reinhard Bonnke died on Dec. 8, 2019 – he is now more alive than ever. He was my boss when I was his publications designer at his Christ for all Nations organization, in England and Germany. A man so innovatively focused on capturing the hearts of the shepherdless for Jesus. He was known for his massive crusades in Africa, and helping to lead more than 79 million people to decisions for Jesus in the past 35 years.

I first saw this unusual German at a British event called Spring Harvest, where thousands of Christians gathered each year, staying in holiday chalets and congregating in a huge tent to hear speakers and to worship Jesus. Bonnke was flown in by helicopter to the campgrounds for a special visit, I’d never encountered such power in a speaker before. He didn’t waste a minute after Graham Kendrick finished leading us in worship; Bonnke got down to kingdom business, challenging us timid Brits. After he prayed for a small group of us who responded to his call to action for God’s kingdom, everything changed for me. I was not the same man. For some reason, God took this man’s prayers and imparted something that was not previously there – amazing. Bonnke would often say, “God doesn’t call the qualified, He qualifies the called.”

He would often shout out loud in his huge meetings, “When the Holy Spirit comes on you, you will know!” Now I understand why he was so passionate about such a simple statement. I had experienced it, but sadly Bonnke knew many were content to simply debate this life-transforming promise from the Father, a debate that leaves the church powerless and ineffective.
Once in Frankfurt, Germany, I was excited to show a poster design to Reinhard that I had just completed. His home was next to the Christ for all Nations headquarters where I worked. His wife, Annie, opened the door and showed me to their study, where I found him lost in another world, enraptured, bouncing his grandchild on his knees, a scene etched in my mind. Annie was Reinhard’s dedicated helpmate. As I watched her prayerful, loving way, I knew without her cooperation, none of it would have happened.

I had the privilege, a few years ago, of inviting him to speak at outreach events in Victoria and Surrey, BC. Pastors wrongly billed the Victoria event as an informational evening to promote his Minus to Plus booklet campaign – I knew different, Bonnke always wanted to speak to the unchurched; sadly Bonnke gently rebuked me by saying, “Next time I come I don’t want to preach to the choir,” and so, with this in mind, in Surrey a small team laboured to get Chando’s Pattison Auditorium crowded with those who needed Jesus, that night we had over 300 decisions for Jesus.

At a memorable meeting in Victoria with Pastor Bob Birch, he spoke to pastors and leaders and others. I sensed the power of the Holy Spirit in Birch’s meeting; Birch had hardly said a word and, strangely, I started to weep and weep from deep down inside for several hours. I tried to stop but couldn’t; I wept all through the meeting. I knew it was the grieved heart of the Holy Spirit that I was feeling.

A lost world is looking for a church that is for real.Bonnke would urge the Canadian church to practice the following verses:
“This is how we know what love is: Jesus Christ laid down his life for us. And we ought to lay down our lives for our brothers and sisters. If anyone has material possessions and sees a brother or sister in need but has no pity on them, how can the love of God be in that person? Dear children, let us not love with words or speech but with actions and in truth.” 1 John 3:16-18 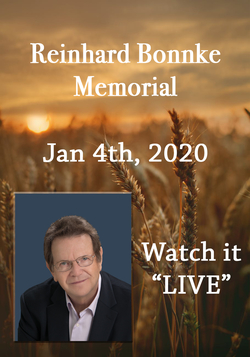 NEWS PROVIDED BY
Christ For All Nations
Jan. 2, 2020ORLANDO, Jan. 2, 2020 /Christian Newswire/ — On Saturday, January 4th 2020, Evangelist Daniel Kolenda and the Christ for all Nations (CfaN) team will host a memorial service to celebrate the life, ministry, and incredible legacy of Evangelist Reinhard Bonnke. The founder and spiritual father of CfaN, Evangelist Bonnke passed away on December 7th 2019. He was 79 years old.

Best-known for his pioneering mass-evangelism work throughout the continent of Africa, Evangelist Bonnke was a champion for salvation. All told, more than 79 million people made decisions to follow Christ because of his clear and passionate Gospel presentations. He spoke to some of the largest crowds ever gathered in history, wrote more than 30 books, and left an indelible mark on the global Church. From the beginning, his meetings were marked by miraculous healings and other remarkable displays of God’s supernatural power. It is not an exaggeration to say that God used Reinhard Bonnke to transform the continent.

Many evangelist, pastors, ministry leaders, and friends impacted by the life of this incredible man of God, will travel to Orlando from around the world to honor Evangelist Bonnke, grieve with his family, and rejoice in his homecoming. In addition, there will be a special time of rich worship. It promises to be a foretaste of heaven.

The service will be held at Faith Assembly in Orlando, Florida. The service will be open to the public. Attendees are encouraged to arrive early as the doors will close promptly at 11 a.m., out of respect for the family.The service will also be streamed “LIVE” on the ministries web site and also at Bonnke.TV, GOD.TV and other platforms. LIVE coverage begins at 10:00 a.m. (est).